Hey all, a bit later than usual, but thanks for joining me for the midweek edition :)!

Jacob’s Apocalypse and Other Stories is a collection of short and flash fiction across the genres of fantasy and sci-fi. I decided to compile it as a free read in 2014 and hope you’ll enjoy this short excerpt from the title story that I want to share with you today :).

We enter as Jacob makes a last stand, enjoy :):

~ “We must fall back,” Mara yelled, echoing Kale’s sentiments as she

did her best to stay alive. “We must!” She screamed almost and in the fleeting moment I was able to look at her face, I was sure I saw tears mingling with the blood on her cheek.

“No,” I answered again, even though I could see them dying. Whenever I chanced to look at anything other than those that were attacking me, I could see them. I could hear the screams. Screams that did not stop. The archers had tried their best, but with children making up most of their numbers, it had been difficult to stave off the animals. We were surrounded, a small group of the Lost in the midst of grabbing, clawing, killing animals. Maybe some of the elders have escaped, I thought to myself, the irony of the bait being the only ones to survive the onslaught not escaping me.

“Jacob, we can make a path, we can still make it back, there’s still time,” Mara beseeched me, her sword returned to the sheath on her back as she used her knives. She liked to do so when in close combat and the animals, were close and closing in.

I could not see Kale anymore and assumed that he too had been lost. It was happening, one after the other I knew. Those I had known for as long as I could remember were giving their lives for my precious stones. Could it be that I had believed in vain? Could I have misunderstood what they intended me to do? Surely they did not mean for all to be killed, leaving me alone.

“Jacob?” Celeste. Hearing her voice cast away all doubt. She had come back for me and would make sure that no harm came to me. I used my sword to take the heads of a few more of the animals before looking frantically to see where she was. I could feel the animals tearing away at my clothing, grabbing me in my distraction, but they would be nothing compared to her. Celeste would destroy them all.

“Jacob, what are you . . .?” The screams I heard next come from nearby and looking over, I saw Mara’s dark head disappearing into an animal’s clutching hands. I felt something for a moment, but . . . Celeste.

“I never gave up Celeste, I knew you would not betray me, I knew the stones would not lead me astray.” I reached out my hands to her, feeling them grabbed and pulled by the animals. The pain I should have felt as they tore my flesh with their claw-like fingernails was eclipsed by her beauty. She smiled at me, suspended above the carnage, reaching her own delicate hands out to touch me, to take me with her, away from it all. I felt my knees buckle, felt myself sink to the floor, the animals beating at my head and body with violent abandon. Yet, all I saw was her.

She touched my hands, pulling me up and taking me to her bosom and as if tired from the fighting, I found myself falling into a relaxed state, almost sleeping, immediately realizing that there are no more screams. ~

This is one of the strangest shorts I’ve written thus far with regard to style —  it doesn’t stay quite the same throughout the story. As for content, I definitely didn’t know what was going to happen next as I wrote either ^_^.  Read the story here: ‘JACOB’S APOCALYPSE’

Do you enjoy stories of doom and gloom? Share with me in the comments below ^_^.

Have a great evening all and I’ll see you Friday ^_^! 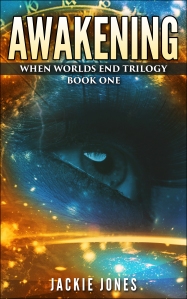 Look out for the Awakening Character Guide on May 20, 2015 and begin the story using the link above, as with only FIVE chapters left, you’ll want to catch up ^_^.

Remember you can also contact me for information about facilitating reviews, interviews, etc on this blog site ^_^.