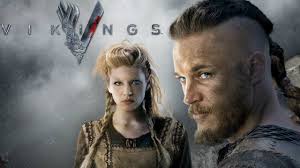 For those of you who might not yet be in the know, Vikings is back! It returned Thursday night and though I haven’t seen the first episode of season 3 yet, I’m very excited to do so.  Yes, I mentioned this one many months ago, but I tend to do that with shows I love :). The series revolves around the adventures of Ragnar Lothbrok (Travis Fimmel), who was a legendary Scandinavian warrior and hero and is exclusive to the History Channel. This is one of those shows that hasn’t disappointed me from its first season and though some story

arcs have made me raise an eyebrow, it hasn’t been enough to knock me off the wagon. Usually I’m way behind on finding out when shows I really love come back out, so I’m pleased to have been on the ball with this series So, if you’re into series that are based on amazing legend, all wrapped up in a lovely pile of hardcore battles, manipulative politics and of course, hot as heck humans gracing your screen, this one is for you ^_^.

Besides wondering who Ragnar will take down next, I’ve been . . .

1) Trying not to lose my shit! Yes, cause some weeks you just have to do that or fall over the edge. In summary it’s been a rough one emotionally, but I’ve been trying to stay on top of things, instead of completely dissolving into a pile of mush ^_^.

2) Working out my March marketing promotional activities for The Wardens Series. If all goes well I’ll be launching season 2 in summer 2015 and this latest promotional campaign will begin in March. (The Wardens Series is my ongoing, NA supernatural thriller/fantasy short story series, featuring the exploits of wardens Erin and Zach. They travel the globe keeping rogue supernaturals in line, while all kinds of crazy goes on around them and within their partnership.)

That’s all for today lovely readers, what were the highlights of your week? Share in the comments below :)!

Please note: March 11, 2015, Part 1 of Chapter 16: Glamorous Lies, will be posted on ‘Jackie Jones on Wattpad.’ The Awakening Character Guide will be available on March 4, 2015. Get acquainted with the story using the link above, as with only FIVE chapters left, you’ll want to catch up ^_^. Over 6.5k reads so far :)! This unusual sci-fi/fantasy is not for everyone, are you one of the chosen?

Look out for a new FEATURED BLOGGER from April 2015!